What Is The Situation Of Other LED Displays Besides Mini Micro LED?

The LED display industry continues to innovate, especially the multiple breakthroughs in the new technology of Mini/Micro LED have brought new vitality and surprises to the industry, attracting many LED display companies to increase their investment in research and development of two new products, and the market has set off a wave of Mini /The wind of Micro LED expansion. Looking back at the market situation of display screens such as flexible LED screens, LED transparent screens, and outdoor large LED screens in recent years, we will find that these conventional LED display products are more stable than the current Mini/Micro LED market. The display industry presents a situation of “a hundred flowers blooming”. When new and old products coexist, it is also necessary to think about the prospects of other conventional LED display products when new products are frequently born.

In stage presentation, stage designers use the characteristics of LED screens to carry out creative stage design, which often brings surprising stage performance effects. In addition to making people’s eyes “bright” in the field of stage art, the flexible LED display has recently jumped into people’s eyes through large and small exhibition halls. The adoption of new display devices has further opened up the application field of flexible LED displays, such as ball LED screens, because they have a 360°full viewing angle, can play videos in all directions, and have no plane viewing angle problems. The earth, football, etc. are directly reflected on the display screen, which makes people feel lifelike, so it is widely used in major scientific and cultural venues. The use of special-shaped LED displays in cultural and technological venues is a collision of culture and technology. At present, special-shaped LED displays can effectively convey the information of venue items and historical and cultural information in museums or exhibition halls, which has a strong impact on visitors. Attractive, greatly enhances the effective output of the content. In the future, special-shaped LED displays will also be more widely used in various exhibition halls around the world due to their unique advantages.

At present, special-shaped LED displays are not only active in the field of stage art and exhibition halls, but also in some bars, supermarkets, corporate exhibition halls and other places. Research in the subdivision field, and it is adapted to the personalized customized display market, which usually takes the private customization route, and has now occupied most of the customized and personalized display demand market, so compared with other LED displays, although the demand is relatively high.

LED transparent screens have been popular since 2017, and have developed a stable market scale. It is precisely because they meet the requirements of national urbanization construction, night economic development, and urban amenity construction. Changing conventional LED displays must destroy buildings. The model of building wall installation is simple, lightweight and beautiful in every corner of the city. Because of its self-illumination and bright colors, LED transparent screens meet the needs of night attractions for light. Therefore, although urban night scene lighting is still dominated by lighting methods, due to the operability and diversity of lighting brightness are much lower than LED transparent screens have been favored by various buildings, such as New York Times Square, Shanghai Bund, Pearl River Night View and other landmark buildings have installed LED transparent screens. 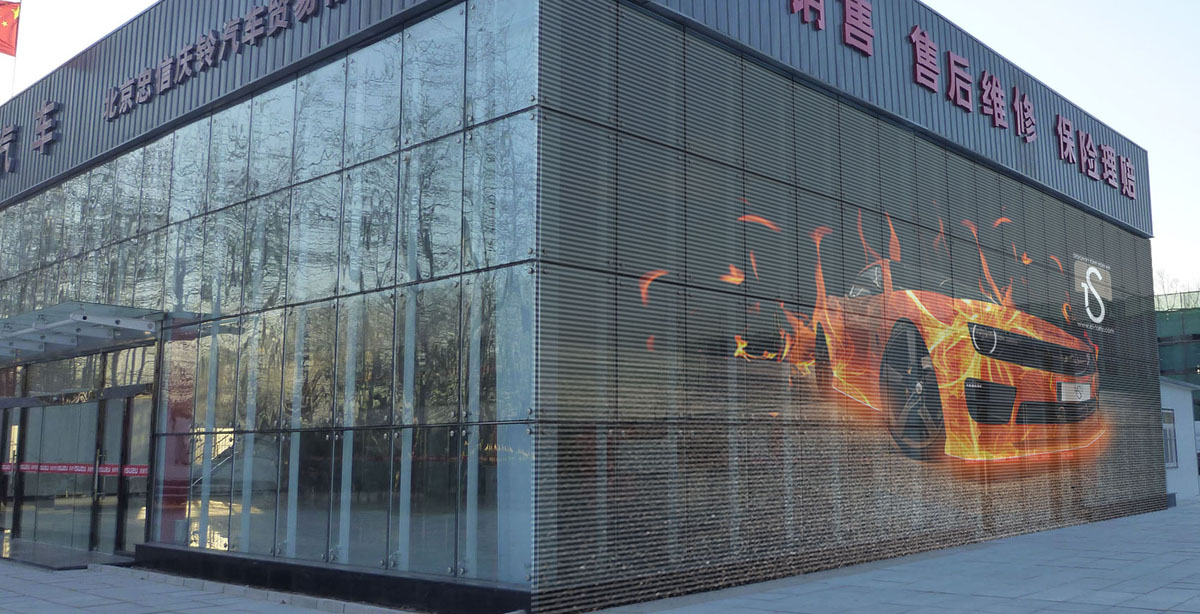 In terms of building lighting, building LED lighting, as part of the urban lighting project, beautifies the night sky of the city, and even becomes a method of landmark buildings. Among them, the LED transparent screen captures the characteristics of the city and buildings, and presents different appearances and display contents according to the different characteristics of different places. It has both practical and aesthetic purposes in building lighting, together with lighting products. Create many landmark buildings with bright lights and elegant lights. Therefore, landmark buildings in many regions have adopted LED transparent screen technology. The application of LED transparent screen in urban lighting not only has reasonable display function, but also has a high artistic level, becoming a classic work of urban image.

In the past two years, the application of naked-eye 3D outdoor large screen has been very fierce, and the outdoor LED display has also appeared in front of people with a new look through the integration of interactive technology. The blessing of technology gives outdoor LED displays the confidence to enhance interaction and enhance communication benefits, and display policies such as the “Ultra HD Video Industry Promotion Plan” and “One Hundred Cities Thousand Screens” have awakened new vitality of outdoor LED displays. The adoption of 3D naked-eye large LED screens in iconic punch-in places not only implements the high-definition development of the video industry, but also accelerates the realization of the “One Hundred Cities Thousand Screens” plan, and points out a new development direction for outdoor LED displays.

The LED display industry is an industry that insists on innovation, constantly subdivides application fields, and maximizes the needs of users. Recently, the field of Mini/Micro LED, which has been reported frequently, has attracted the attention of LED display companies. However, in addition to the wave of new products, the development of traditional LED displays is also worthy of attention, whether it is special-shaped LED display, transparent LED display, outdoor LED display Displays, or other conventional LED displays, in the market where new and old LED products intersect, are also due to factors such as the precise subdivision of the force, the insistence on innovation of their own products, and other factors. More application places under the sub-market.